The Global Mountain Biodiversity Assessment (GMBA) teamed up with Map of Life (MOL) to launch a new web-portal for the visualization and exploration of biodiversity data for over 1000 mountain ranges defined worldwide. 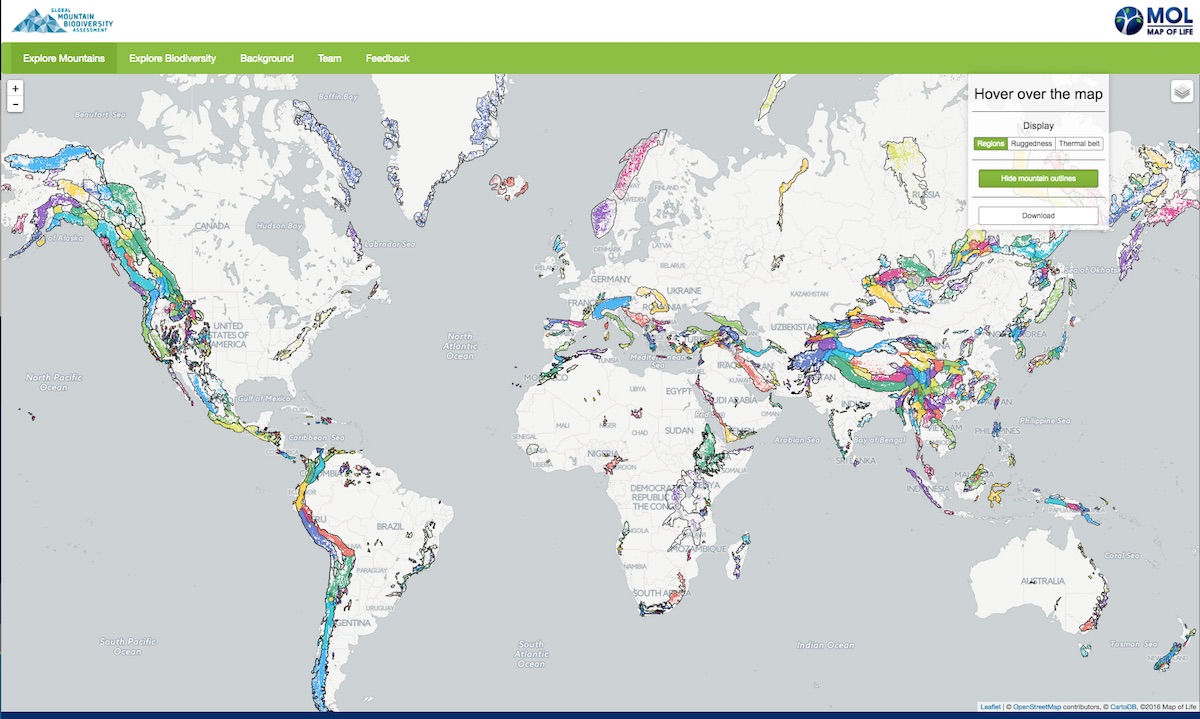 Mountains are hotspots of biodiversity and areas of high endemism that support one third of terrestrial species and numerous ecosystem services. Mountain ecosystems are therefore of prime importance not only for biodiversity, but for human well-being in general. Because of their geodiversity, mountain ecosystems have served as refuge for organisms during past climatic changes and are predicted to fulfill this role also under forthcoming changes. Yet, mountains are responding to increasing land use pressure and changes in climatic conditions, and collecting, consolidating, and standardizing biodiversity data in mountain regions is therefore important for improving our current understanding of biodiversity patterns and predicting future trends.

In order to accurately predict potential changes in mountain biodiversity in response to drivers of global changes and develop sustainable management and conservation strategies, we must be able to define what exactly a mountain is, where mountains are in the world, and what species currently occur in those mountains.

More than 1000 mountain ranges around the world have now been described in a new study published in Alpine Botany by Christian Körner et al. (2016). Additionally, and for the first time, this global mountain inventory coverage has also been combined with expert range maps for approximately 60,000 species across different organismic groups and is being made available online through the Mountain Portal. The Mountain Portal is an interactive web platform provided by the Global Mountain Biodiversity Assessment of Future Earth and developed by Map of Life. With just a few clicks users can explore and download growing lists of mountain ranges and expected species. Downloaded data can then be used for a multitude of projects ranging from mechanistic studies on the evolution and ecological drivers of mountain biodiversity to the development of indicators in sustainability research.

The mountain portal is an open source tool for all types of users, ranging from laymen and citizen scientists to researchers, practitioners, stakeholders and policy makers. It is an evolving resource that will utilize the power of the global community to improve mountain biodiversity and inventory information.