Map of Life lets you search by species name across the 366 million records we’ve imported so far. These records comes from fifty-four different datasets, some of which use different species names to refer to the same species. Last September, Rod Page pointed out one particular case: 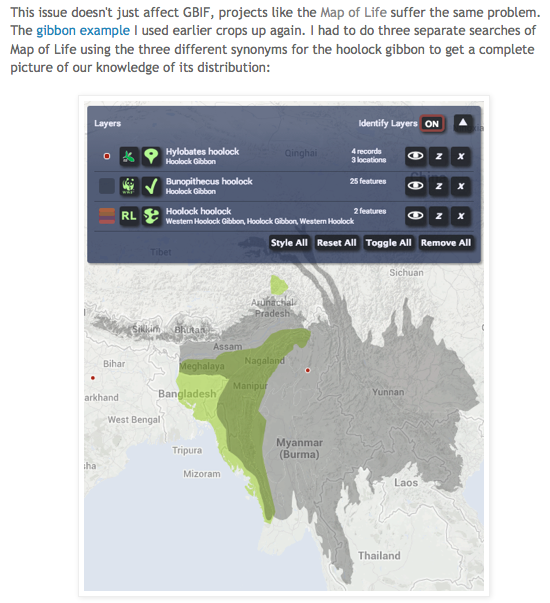 The problem here is one of synonymy. A species may be referred to by a number of names over the course of its history: for example, the western hoolock gibbon, known today as Hoolock hoolock, was known asHylobates hoolock until at least the 1980s, when the name Bunopithecus hoolock was gradually adopted as the correct one. The species was then renamed Hoolock hoolock in 2005. (If you have access to an academic library, you can find all the details in Mootnick and Groves, 2005). Only one of these names is considered valid today; all the alternate names are known as synonyms.

Map of Life’s records come from a wide variety of sources, from century-old checklists to surveys carried out in the 1950s to expert range maps drawn in the 21th century. We have records for the western hoolock gibbon under all three names — Hoolock hoolock is used by the IUCN Red List, Bunopithecus hoolock by the WWF Ecoregion Species Checklists, and Hylobates hoolock by GBIF. This is a relatively simple case: the World Register of Marine Species (WoRMS) lists six alternate names for the Giant Pacific octopus. When you search for a name on Map of Life, the search results ought to contain not just the searched name but all alternate, synonymous names as well.

We decided that the best way to implement this would be by developing an in-house, expert-curated list of synonyms and accepted names, and to supplement these by using the new GBIF Species API. There are a wealth of options available today when picking web services for species name resolution, many of which make their entire list of synonyms available for download. We picked GBIF because of the large number of taxonomic checklists it incorporates — 270 separate checklists, including important taxonomic databases such as ITIS, WoRMS, the Catalogue of Life, Mammal Species of the World and others. These checklists cover every kingdom of life, giving us wide taxonomic and spatial coverage through a single JSONP query. It also allowed us to reuse our code for accessing this API from our work on name validation in OpenRefine.

When you search for a name on Map of Life, this is what happens:

Synonymy on Map of Life isn’t completely solved yet: for example, we currently return only one of the two possible synonyms for Hoolock hoolock. This is because we currently look up only the valid name of the species you search for: a search for Hylobates hoolock will display records stored under its valid name,Hoolock hoolock, but will not display records stored under its alternate synonym, Bunopithecus hoolock. The next step is to look up not just the valid name, but all synonyms ever used to refer to that name, so that we can find every record which might be relevant to your search. This should be achievable using GBIF’s/species/search API call, as long as we make sure that these searches can be made fast and responsive, and don’t add too many unhelpful names to your search.

What do you think of our new feature? Please let us know if you have any problems with it, or have suggestions on how we can improve it!